Baseball has long served as America’s favorite pastime, and the game continues to grow as a platform for effecting social and environmental progress. Major League Baseball (MLB) maintains a charitable arm, MLB Charities, which encompasses a variety of programs, partnerships, and initiatives. Here is a look at some of the organization’s current efforts:

The Official Charity of Major League Baseball, this well-known organization has benefited from its partnership with MLB for 20 years. For instance, in the 2016 T-Mobile Home Run Derby, Giancarlo Stanton of the Miami Marlins not only won the competition, but his record 61 home runs generated $130,000 in support of the Boys & Girls Club.

In collaboration with Autism Speaks, MLB has endeavored to raise awareness for the needs of individuals who live with autism. The 2016 season featured an initiative in which all 30 teams dedicated a home game to supporting the cause.

MLB showed support for breast cancer and the Susan G. Komen Foundation on Mother’s Day in 2016. Every team that played on May 8 donned uniforms with pink accents and a patch of the iconic pink ribbon. In addition, players swung pink bats, which were later auctioned, along with other items, to benefit breast cancer research.

Traditionally, Earth Day has served as an opportunity for MLB teams to develop innovative ways to reduce their carbon footprint and benefit the environment. These initiatives range from installing LED lighting in stadiums to selling T-shirts made of 100 percent recycled material. Team websites now feature interesting facts about the earth and ways fans can participate in the green movement. 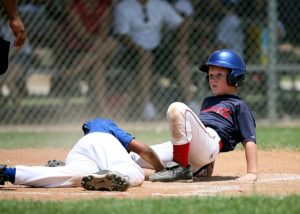 The Reviving Baseball in Inner Cities (RBI) program aims to spark interest in baseball all around the country by creating opportunities for people of all ages and skill levels to compete. MLB Commissioner Rob Manfred remarked in a 2016 interview that the RBI effort is an investment in the future of the sport and all the athletes and fans that make it possible.

The Welcome Back Veterans organization aims to help members of the military diagnosed with PTSD receive the medical care and attention that they need. MLB supports this effort in a number of ways, including honoring military personnel at games and facilitating surprise reunions with their families.

In 1986, the Baseball Assistance Team (B.A.T.) formed to help retired members of the baseball family  face adverse circumstances, be they financial, physical, or psychological. Each year, B.A.T. presents an award to the top donating teams in the American League and the National League. In 2016 the Detroit Tigers and the Arizona Diamondbacks received the honors.

Every year on April 15, MLB recognizes the day that Jackie Robinson broke the color barrier by stepping on the field as a starter for the Brooklyn Dodgers. Players wear his number, 42, to honor his legacy, and the league holds special ceremonies nationwide and raises money for his namesake foundation.

Breaking Barriers is another tribute to Jackie Robinson, whose daughter started the educational program. Students from grades four through nine learn about the challenges Robinson faced and the ways he persevered. At the end of the program, each participant has the chance to write an essay about how they have exemplified the character of Jackie Robinson, and the winners are announced in conjunction with the All-Star weekend.

This award is given annually to the MLB player who best mirrors the life and achievements of Roberto Clemente, former league MVP, All-Star, and World Series champion. The league presents this award as a way to encourage off-the-field activity in the community and philanthropy. Andrew McCutchen of the Pittsburgh Pirates won the 2015 award for several reasons, including his involvement in Cutch’s Crew, a mentorship program for Pittsburgh youth.

MLB has actively supported ALS research since the 1930s. ALS is also known as Lou Gehrig’s disease, named so after the former New York Yankees star. In recent years, the league has participated in the ALS Ice Bucket Challenge, which contributed to the funding of a new discovery related to the disease. With information about a gene that is common among ALS patients, scientists are closer to finding a cure.